Sunday, 17th of November started off very very foggy and we were looking forward to a nice Sunday Roast later in the day.  The night before Jeff and I watched ‘Elite Troop’ (Tropa de Elite) and Aphex had been sitting on my lap, as I relaxed on the beanbag.  She was there for ages, something she hadn’t done for a while, she was becoming more settled again after the kittens our other cat had been nursing had left.

Sometime during late morning Jeff’s phone rang.  Daniel answered it, but the call dropped.  The phone rang again, and Daniel answered, it was for Jeff.  I heard him saying ‘yes, she’s our cat, what happened to her?’ and I knew something bad had happened.  The call was from the emergency vets in Streatham.  Someone called an RSPCA ambulance, she had been hit, but was alive.  So we all jumped in the car and went to see her, remembering to bring the insurance docs with us.

When we got there, we were asked by the vet if we had insurance – he seemed relieved to hear that we did.  And also that Aphex was chipped.  They just scanned her when she arrived and were able to call Jeff there and then.  So there we were and there she was…

She had been hit about 90 minutes earlier, found (and probably hit) on Elmbourne Street.  We still don’t know if the people who called were the ones that hit her or not.  Probably not as she would have ran off after being hit and probably collapsed.  We’ll never know.  All I know is that whoever called the ambulance saved her life.

The vet said he wanted to x-ray her to make sure she was ok internally, he said that often the diaphragm ruptures and all organs spill into the lungs…  Also her right leg joint had come off the socket.  And he said the next 24 hours were critical, and she could die.  So he took her to be x-rayed and we waited in the reception.

When the x-ray came back it looked like her organs were intact, but there it was, an air gun pellet proudly showing itself on hip area.  We couldn’t believe it. but it had probably been there for a long time and we needen’t be concerned about it.  We just laughed in disbelief.  What kind of twisted, bitter, maniac would shoot a cat?  I’m still making it my mission to find out who it was, as apparently you need a license for those guns.

We left the emergency vet, Aphex was going to stay there overnight and then be transferred to our vet in the morning to be assessed further (i.e. more x-rays).  Our insurance only covered her up to £3k so she couldn’t go to a fancy hospital.  We were to expect a call in the morning and had an anxious night, keeping fingers crossed hoping she would survive the night.  Also, if she didn’t urinate she might have to be put down, because if there was any damage to the nerves in that area nothing could be done.

Fortunately, that night Jeff remembered he had changed his insurance provider, which meant we had actually £5k to get her through this, which was good news, the x-ray alone cost £90 – that first night would come to around £250.

The phone rang early in the morning and I was the only person up and about – my heart skipped a bit, and I prepared myself for some bad news.  And when it was good news, she was alive and she had urinated! I felt so happy, I had to hold back the tears.  They were transferring her to our vet and we would get a call later after further assessment.  So off I went to work, feeling positive about the outcome of this horrible accident.

After a couple of hours I got a call from Jeff and it was bad. After more x-rays it turns out her diaphragm had indeed ruptured. it’s just that yesterday her organs hadn’t moved up into her lungs.  Moving her to the vets resulted in her heart ending up at her throat.  So the next two hours were spent in agony, as she went into threatre for an emergency operation, the odds for her making it were 50-80% – so I just decided that she was going to make it, after having a cry at work.  This was no time to be negative or afraid.  Aphex is a young, healthy cat!

And she did make it, Jeff got a call and she was all stitched up, everything back in place, and she was sedated to her eyeballs.  It would be a case of seeing if she survived the night.  Again.  Vets also said she was infested with fleas, so much so she was anemic!  They were jumping out of her during the op.  We had been struggling with fleas since the kittens were born, having treated kittens and cats many times (and the house) – we thought we had gotten rid of them, but we were wrong.  Vet said this year has been particularly bad everywhere and then gave us a different flea treatment (we had been using Frontline, and we were given Advocate).  Once again we sprayed the house and washed everything when we got home.  3rd time since August.

Here she is, after the operation on Monday

If she survived the night she would have to be in a cage for sometime, as she had broken her hip on the left and her hip joint had popped out of the socket on the right hand side.  Also it was impossible to know if she had brain damage, an MRI scan is pretty expensive and we couldn’t afford it, even with insurance.  So we found ourselves on a ‘let’s see what happens day by day’ situation.  I still felt positive, not sure why.  For someone who thinks of herself as a pessimist I was feeling pretty adamant and had no doubt in my mind she was going to make it (well, there was the fear that she wouldn’t make it, but it was very minor). The next step was to see if she would urinate and poo again, and to get her to eat on her own.

The next few days are a bit of blur, Aphex got visits in the evening and she started to eat on her own after a couple of days, and was passing urine.  It was all very positive.  She was constipated due to the morphine like pain killer she was on, but that was normal.  After another night spent at the emergency vet, she was considered well enough to spend the night alone at our vets without needing any monitoring.  Just as well, because moving her from one place to another every day wasn’t ideal.

And then on Friday evening she came home!  She came home to be in a large cage, and she brought a lot of medicines with her: antibiotics, pain killers and laxatives.  She was home 5 days after being hit.  It’s really amazing how fast cats recover.  For the first few days she looked very vacant and dazed (long after the morphine wore off) –  we worried she may have brain damage.  But then we reasoned she may have been concussed and lo and behold, after a week at home it was like she was more herself again.

Rusty, as always, trying to get accepted by Aphex and trying to have whatever food is around.

Slowly but surely the vacant look left her, and she started looking at us again, and sticking her paw out of the cage to try and get Rusty.  For the first days she wouldn’t look up, probably because of whiplash, but she’s moving her neck a lot more.  AND she’s desperate to get out of the cage.  She escaped a couple of times, limped around the room and eventually got back in the cage.  In the last day she started to move very quickly, so now we have to very careful to never open the cage if the living room door is open.

This morning Jeff took her to the vet, as there had been no bowel movement for many days – and given that she has a broken hip this could mean that it’s painful for her.  They were very happy with her progress, it could be she may not need an operation after all, we have to wait and see.  He stuck an enema up her bottom while Jeff held her, and a couple of minutes later she did her business.  A relief to all involved, especially Aphex I should think.  Also, she vomited last night, this means the painkillers we have been given her could be giving her an ulcer.  So time to take a break from that (for a day) and then give her some more and see if she gets sick again.  Not sure what we’ll do if she does, I’d imagine they switch to something else.

We are thankful we had pet insurance, as this will cost around £2 – 3K (depends on whether she needs another op or not) – We still had to pay for all beforehand and then make the claim – which is not ideal.  What if we didn’t have credit cards or funds?

But we’re not living one day at a time anymore!!!  She should be out of the cage in a few weeks.  I miss being able to pick her up and give her a cuddle, can’t wait to be able to do that again.  And to watch her chase Rusty around the house.

And an update on the kitties, they all had homes to go to and the last one, now called Elmer (stripey ginger) was picked up by Andy.  Steph got mini-Rusty and Tom (now called Isis and Osiris), Vicky got Cohen, your friends Joe Jackson and Tina got the other black and ginger (shelly who the vet said was a girl but in fact was a boy) and swirly. 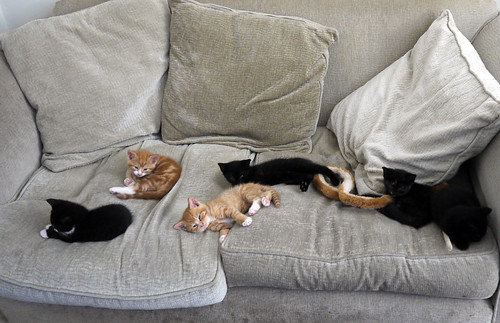 This turned out to be my most viewed photo on Flickr…