It’s 3:30am in Vegas and 11:30am in London and, predictably, I am wide awake… Our day started at 6am yesterday, taxi at 8 to Gatwick. Flight delayed by an hour due to blocked toilets. Then a 10 hour flight which was actually was not as bad as other long flights I had… At no point did I ask myself ‘is there really that long to go???’. Not sleeping on the plane actually means keeping a sense of real time, rather than dozing off then waking up hoping 3 hours went by and realising you only slept for 20 minutes.

Watched Dallas Buyers Club on the plane, which was very good. A really good comedy called Silicon Valley, must remember to seek that when we get back! And American Hussle. Pretty satisfied with choice of viewing.

I got a window seat for last two hours and flying over Utah and Nevada was a treat, hence all the photos from the plane. Best viewed in full size!

Was expecting unfriendly border control, but no. Very friendly and relaxed. Wished me a happy birthday, which is in 2 days. I can hear Spanish everywhere and driving to the hotel (MGM Grand) reminded me a little bit of Gran Canaria. That, I didn’t expect.

Dropped our luggage, then straight out for a drink in one of the bars at MGM, Guinness for me, from a bottle, but it wasn’t real Guinness, it was thin and quite horrible. It felt claustrophobic, with all the machines and lack of sunlight, so we went outside. I took a lot of photos as usual, no tools here to edit, so I’ve posted them all raw. I’m glad we brought laptop, otherwise I’d have to wait until I got home to load the photos from my camera.

We went to a shop, bought a couple of drinks (Buzzballs) and wondered down the strip, down from MGM then back again. It felt exciting, so many people!!! And everyone is a tourist. I thought I was going to hate the place but those first few hours were, well, interesting! A guy on the sidewalk offered girls to my 15 year old son and I pointed that out to him and we joked about it. Had my photo taken with Darth Vader and Chewbacca (was a little merry at this point).

After watching the fountains, which only lasted one song (Lucy in the sky with diamonds) we suddenly felt exhausted. 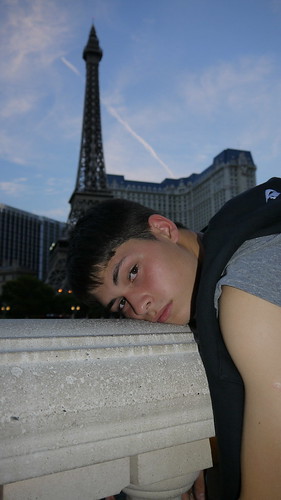 It was only around 7, but to us it was the middle of the night. We also felt desperately hungry and ended up at MacDonald’s. I’m hungry again, it’s nearly lunch time in London. My stomach felt so heavy and knotted, I need fruit urgently! We just walked backed to the hotel like zombies, feeling jaded. There were even more people out and it was getting a bit much. Two ambulances went by. Felt like a different place at night. We saw little of it and went to bed. Here I am, five hours later. Walking back to the hotel last night I was left with the feeling that you could quite easily go insane in Las Vegas, after a few days… A gigantic seaside resort, in the desert.