Woke up at 7 and we were down at 8 for breakfast, out of the hotel and on the road by 9. Somehow we spent 11 hours on the road to Monterey, 350 miles.

We first stopped at manicured, clean cut, Santa Barbara for pit stop and driver swap (Jeff drove the first leg, then it was my turn). This weekend is car weekend in Monterey, so along the road an amount of mainly sports cars I could not count, as there were many, drove alongside and past us, from LA to Monterey. Monterey Fuel Run photos.

This was the reason why it was so hard to get a place to stay in Monterey, we were lucky to even get a place in this motel, as it’s the busiest weekend in town.

Drive drive drive, music, music, music and we stop at Avila beach for lunch. I got the stickiest, most delicious fudge cake from Hoola Hoot. I still haven’t finished it, I can only cope with a couple of bites at a time, it’s super sugary, but also wonderful.

We got into a debate about which way to go, because it was 3pm already and we were only half way there, and quite frankly, the novelty of driving on the coast was wearing off. There’s a limited amount of beautiful landscape one can absorb in a day from inside a car.

Lots of cyclists about on the roads, in LA too, and lots cycle lanes…

So, we managed to convince Jeff to drive on the motorway, to get there more quickly. But he was driving and he was really keen to go on the coastal road, all the way, so he suddenly took and executive decision to go back to it. And I’m so glad he did, because it was amazing and a little scary in equal measure: lots of windy roads and random fog, blinding sunlight and angry sounding, overtaking sports cars. But it was all worthy for this view, of the clouds, looking like fluffy waves, over the sea…

I filmed it, as it captured it more comprehensively… 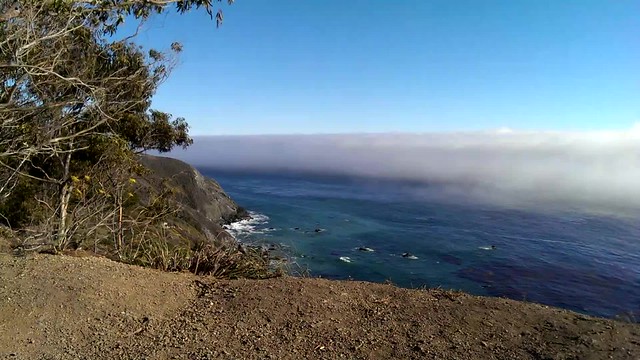 The second half was more beautiful than the first half of the journey. The weather was quite variable too. Certain areas looked like Cornwall, then the moors, then there were green mountains. Sunny one minute, then a thick sea fog that enveloped everything.

We stopped at a sea lion/elephant seals viewing point and actually saw lots of gigantic elephant seals!!! They were pretty close by (about 10m away down the beach below viewing area) and wow, how huge they are!
Elephant seals photos

It was an exhausting drive, but I’m glad we persisted. Daniel fell asleep for a lot of it, but he did see most of the scenery and also took lots of photos when I was driving. When he was asleep and I was driving I asked Jeff to take photos. As he wasn’t really taking any I came up with this inspiring phrase: ‘It’s better to haven taken a photo and to delete it than to never take it at all’

We are staying at Super 8 Motel in Monterey. Daniel’s and mine’s first motel experience. It’s like a studio flat in here. Kitchen with microwave and fridge, and a table, two double beds, a desk. Ok Wifi. Very nice. Jeff is our tourist guide, and keeps coming up with facts and figures wherever we go. So, in Carmel you are not allowed to wear high heels without a permit, to prevent lawsuits caused by falls on uneven pavements. And Clint Eastwood was mayor in Carmel, which is the next town nearby. Also, I lived in Mexico and I remember there being a Monterrey in there too, except the one in there has two ‘r’s. SOOOO TIRED! We are staying here tomorrow too.