I woke up at 8 today, the very very latest! Jeff and Daniel slept for another hour. Had very strange dream last night, we were in LA and massive waves were washing all the people from the beach up to the hotel walkway and back down again. No one was really scared, it was sort of fun. I have recurring dreams with big waves but they are usually terrifying… There were a few signs in LA for tsunami evacuation route, so maybe that stuck in my mind. Also many areas marked as liable to flooding on drive yesterday.

It’s cloudy today and we are not sure what to do yet. The ‘best aquarium’ in the US is in town, so maybe that.

I’m such an idiot, I forgot to set the clock on my camera to this timezone, so the timestamps on all the photos taken so far will be in London time. Grrrrr

I’m officially peeling but at least the crazy itching has decreased. Peeling reminds me of Brazil and being a teenager, as it was a regular occurrence. This time even hairline along my forehead is peeling. I must have messed up the suntan lotion on that area! Skin cancer is on the cards, as well as lung cancer from all the smoking I did. Take your pick. It will probably be something else.

Daniel is obsessed by NFL for some reason and seems to be watching a lot of it whenever we are in the room. He should be reading poetry for his English GCSE instead. He also spends a lot of time on Facebook/Snapchat/Instagram talking to his, I think, girlfriend.

Also the other night in LA, I caught what I think was a Mexican version of Breaking Bad on TV 😀 Exactly the same dialog but with Spanish speaking people. The actor playing Walt was a younger lookalike. Googling it, seems there have been a few remakes in Spanish. As I could understand everything they were saying I assumed it was Mexican. It’s the Spanish I understand best.

As thoughts are pouring out: I’m glad we drove on the coastal road the opposite way you are supposed to (South-North) because I wouldn’t have liked to go around that curvy, narrow, mountain side road on the cliff edge side!

————————————
We were going to drive to Carmel, but the traffic looked horrendous, and I was in charge of the vehicle today, so I came off the motorway and we stayed local. Except to get back to Monterey we had to drive through some more bendy roads, through lovely forest reservation area…

We got into the harbour at 11:30 and had brunch at the Fish Hopper, which was expensive! But had an amazing view of the sea, from where we sat I could watch a seal pup perched on a rock, and its mum swimming around. The waitress who sat us said the day before there were whales nearby, and they were jumping high up. She was quite excited about it, said it was a rare thing. This made us want to see whales. 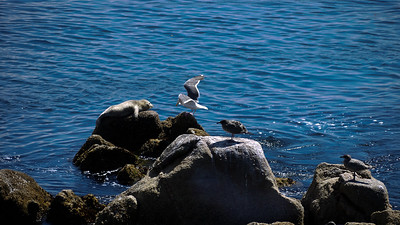 Went for walk along the coast and booked whale/dolphin watching on a boat for tomorrow morning. Before that we had sat down for a break and man with binoculars on bench next to ours pointed out the whales to us, they were about 2km away, you could see the jets and their tails! AMAZING!

On the background, the constant sound of Ferraris and other noisy sports cars. We agreed with the man who showed us the whales that the town needs less cars and more whale watchers 🙂 While we walked we realised there are A LOT of sea lions in the sea. You could hear them barking quite loudly, also lots of birds, the California sea otter and more.
Monterey used to have a canning industry as well as being a big fishing town. Walking around its past history is all over the place. The water is very clear, you can see all the way to bottom in some places.

Daniel was very tired so we took the free bus back to the car park, he fell asleep instantly and went straight to bed when we got back to the Super 8 Motel. So Jeff and I went for a run around the back streets behind the main road where the motel is.

These were what I imagined typical American suburban streets, not rich, but with nice houses and cul-de-sacs, no traffic… Jeff went back but I had another km in me – no exercise for about 3 days, so I had lots of energy. Except when I came back to the main road I took a wrong turn and before I knew it I was lost. I turned the roaming on the phone so I could find myself and I found my way back. So I was only lost for 15 minutes. While this was going on I saw the dead raccoon (on the mobile phone photos below). The two cars with lots of things inside them are just outside our motel. Here’s the run, it was my second fastest 6km ever!