Had a yummy breakfast of bagels and various cheese spreads (sun dried tomato was favourite) with Ankush and Proma, packed our cases and went to San Francisco at 11, as we had to return the hire car by 12. Hotel checkin was officially 3pm, but sometimes they let you in earlier, and they did. We got in the room before 1pm.

We are staying at the Orchard Garden Hotel, just outside the entrance to Chinatown.

We relaxed for a bit then went out for a wander, through Chinatown, which looks incredible and I would like to spend more time there, then carried on through somewhere very Italian. We ended up near the Fisherman’s wharf, where trams depart from, and got weekly ‘travelcards’. Getting in a tram involved queueing for a long time, so we wondered around, found the toilets after going to the chemist. My period arrived today. The toilets were locked, so a homeless guy just said the code for me to get in, and it worked. I was going to give him some change when I came out, but he was gone. A lot harder to find public toilets here, more like London. In contrast with everywhere else we have been to, where public toilets where readily available, at no cost.

It was cold, so we avoided the wharf today and wondered up Lombard Street, on foot this time. I think this is my favourite photo of today (not on Lombard this one): 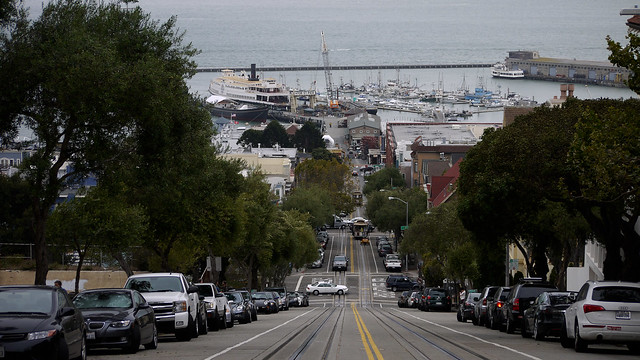 My lower back was killing me, and I felt tired, so we got a bus back to the hotel, once we came down to the flat bit of Lombard Street.  Just before that we managed to jump on a tram for a couple of stops and came off at the last stop.  Jeff and I were hanging from the side (there was no space inside, apart from one for Daniel).

Daniel and Jeff went out and I’m sat on the bed of our room, typing and taking it easy. I have no energy today. Hopefully I will be back to normal tomorrow.