It has been a wonderful Summer, properly hot! I even have a tan and we have been to the Lido! Not with you, you never really want to do anything with us anymore…

Jeff has been training for a 10km race, for a charity. I’m weary of my hip and shall never venture such distances… So he left very early and we said we’d meet him there. You and I grabbed a nice spot near Houses of Parliament Sq. and sat there watching people run by. We were about 300m away from the finish line.

We watched as two people collapsed in a most strange fashion. I’d never seen someone suffer from heat stroke before and I tell you: it’s quite horrific. The first man was staggering about, but was soon contained, and taken in a stretcher. 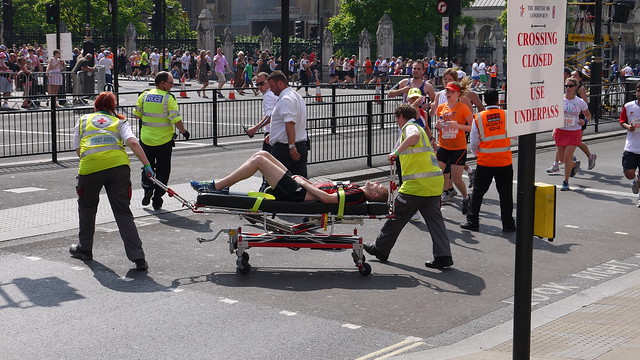 The second man was a very different story. He collapsed on the ground, but his limbs kept on moving quite intensely. He was lying on his back but still sort of running, but also punching with his arms, so no one could get too close to him.

He couldn’t speak English and was in some distress, slowly, more and more people came around to try and calm him down. At one point he was scuffling and running like a wild animal, on all fours! Really crazy stuff. You and I, and everyone else, were just sort of watching, mesmerised and concerned. He wouldn’t accept any water.

The police arrived, and in true brutish fashion, decided that sitting on a man with heat stroke would be a really good way of dealing with the situation. So at that point I got up and shouted at them they were going to kill him! At one point there were 4 people restraining him.

Where were the paramedics??? I mean, someone who appeared to be one was around, but I don’t think she had the required equipt. (a tranquiliser? Not sure, oxygen probably). I’d imagine a lot of people suffered from heat stroke that day, given that we saw two on the same spot.

This was all taking so long, we nearly missed it when Jeff ran past us! But I caught him just in time! He didn’t even see us, it was a punishing run and I was relieved he didn’t get heat stroke! He did prepare quite well. He did it in just over an hour.